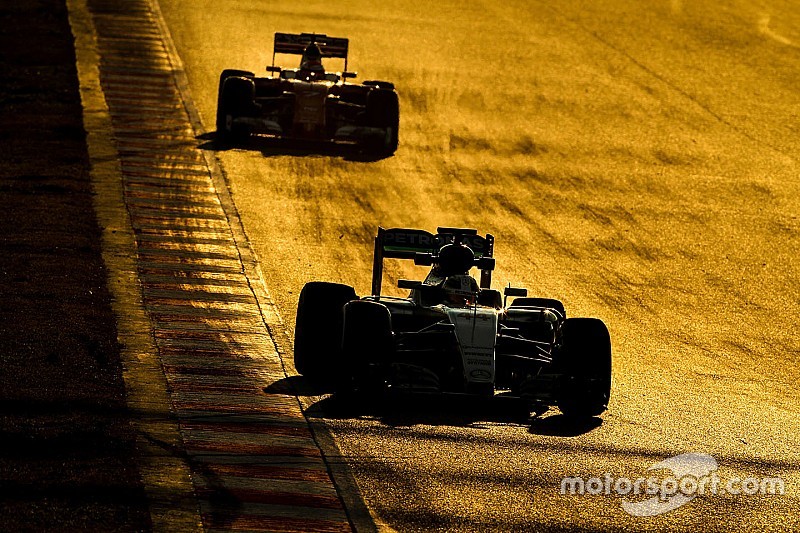 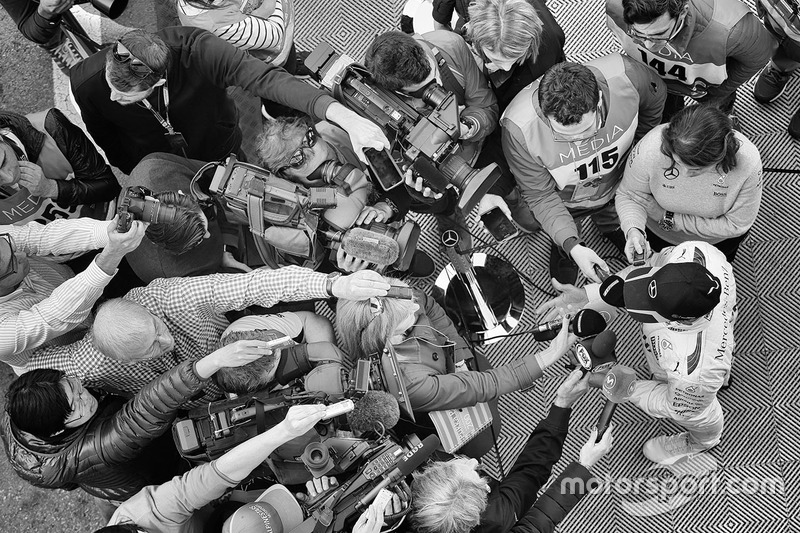 The demand for media content is huge as everyone wants to hear what the World Champion thinks of his new car. TV camera crews and journalists battle for position to get a clean shot or an interesting quote. By photographing this from directly above I have created a unique view of a driver in demand. Canon 1DX, 70-200mm lens, 1/250th sec @ f4.5 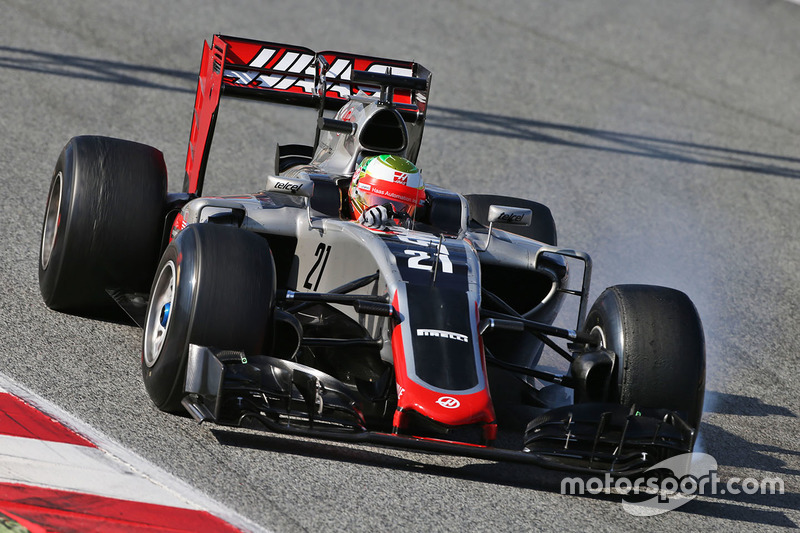 The new kid on the block managed to get good mileage on its new car. Here Esteban pushes hard and locks a wheel as he enters the final chicane. Canon 1DX, 500mm lens, 1/800th sec @ f6.3 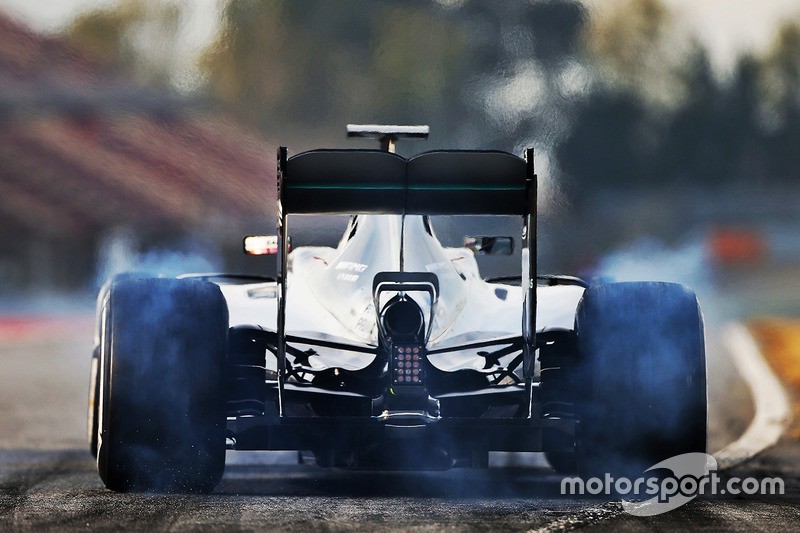 Mercedes set an early marker to their rivals by covering 675 laps in the first four days of testing. Here Lewis makes a practice start at the end of the pitlane as he embarks on yet another race distance simulation. By shooting the car from a low angle you get this dramatic shot as he pulls away and lights the tyres up. Canon 1DX, 500mm lens, 1/1250th sec @ f4.5 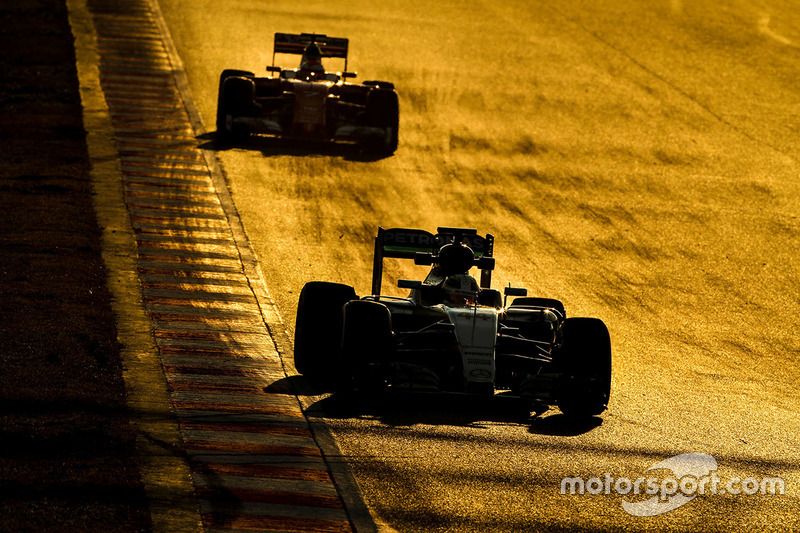 The early signs show that it is a Mercedes v Ferrari battle for the 2016 title. That’s the order here as Lewis leads Kimi into the setting sun. Captured in the braking zone of the back straight, a wonderfully golden and backlit photo that is only possible at winter testing. Canon 1DX, 1/1000th sec @ f16 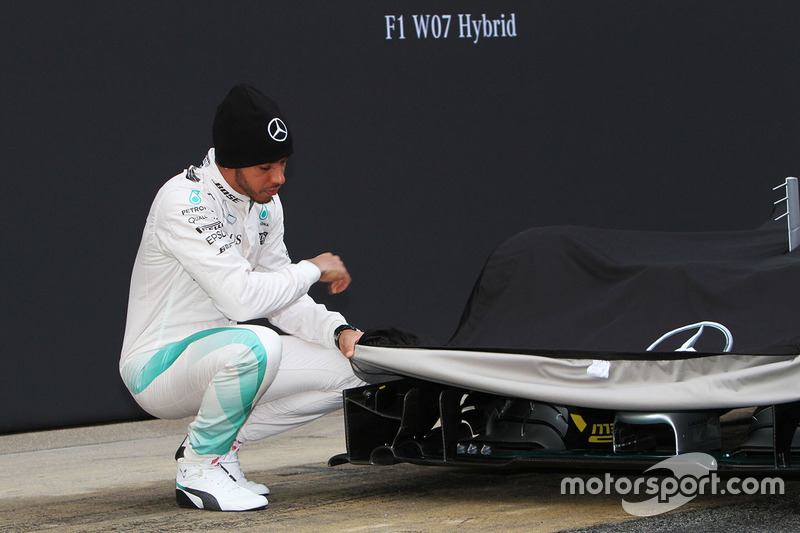 Lewis can’t resist taking a sneak peek of the new Mercedes F1 W07 as he peels the covers off the car for the first time. What you don’t see from this image are the hundreds of photographers, cameramen and journalists jostling for position to capture the moment. Canon 1DX, 70-200mm lens, 1/250th sec @ f4.5 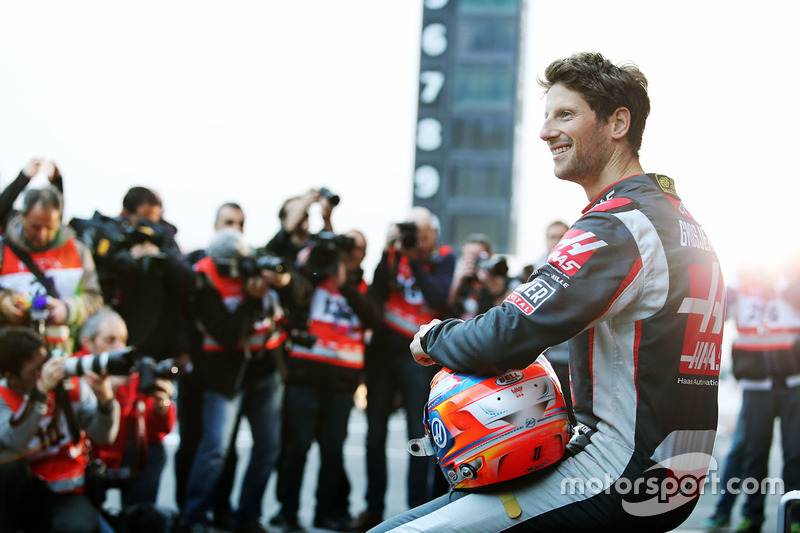 There is a new team in the pitlane and the media are after their shots. Haas F1 is the first team to unveil their car on day one of testing. Romain sits proudly and poses for photographs. By including some of the photographers – and capturing a lucky flash! – it gives a sense of the occasion. Canon 1DX, 24-70mm lens, 1/250th sec @ f2.8 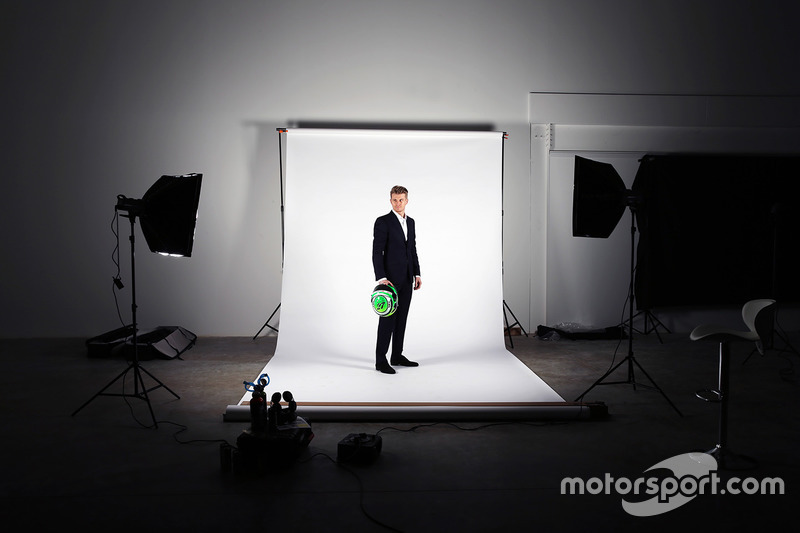 The pre-season build up continues with a photoshoot for the two Force India drivers prior to the unveiling of the new VJM09. The drivers are on good form, and continue to smile and pose after many hours of studio photography. Canon 1DX, 24-70mm lens, 1/125th sec @ f11 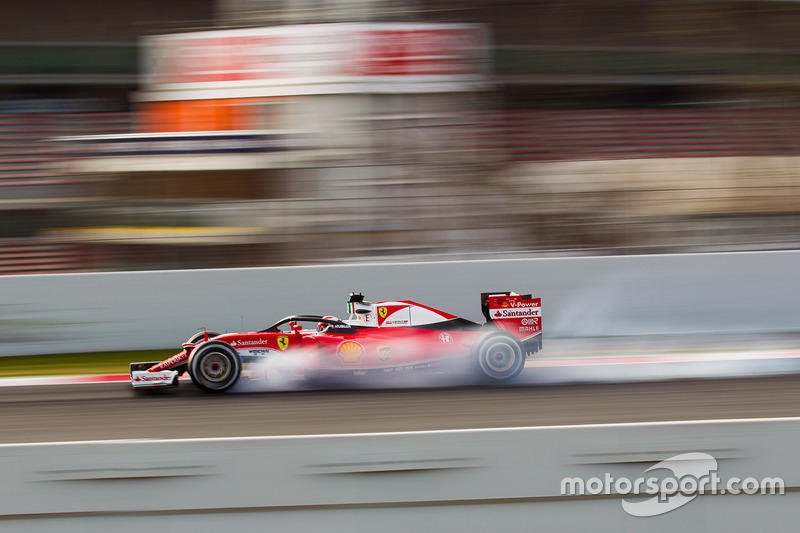 There was much talk of the ‘Halo’ driver protection during the latter part of testing. Both Ferrari drivers tried it for just a single lap each. The media had no warning that it was going to happen, and so was a bit of a shock when we first saw it. Here Kimi has a huge lock-up during his install lap. Maybe he couldn’t see his braking point...? Canon 1DX, 1/60th sec @ f16 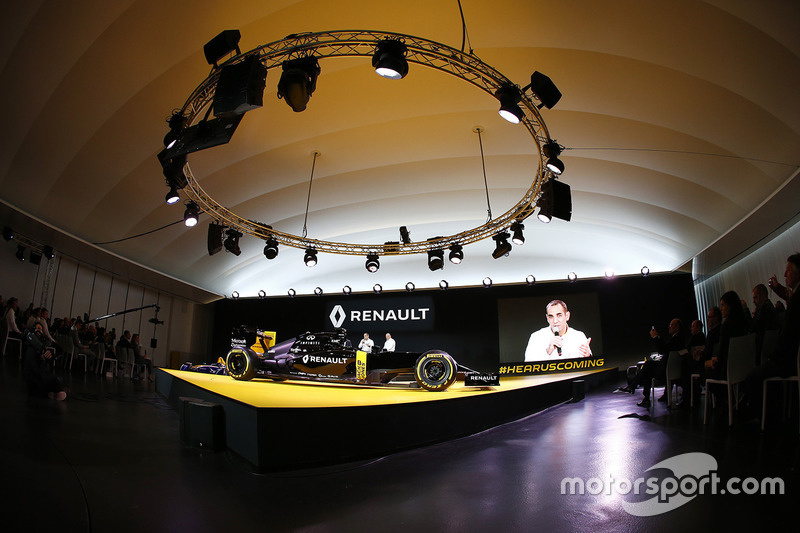 The new season is still a few weeks away, but Renault is back in F1 and hosts a traditional launch event in Paris. We used to do one of these for every team each year, but they seem to be a thing of the past now, with all resources put into getting the car on track, and the marketing opportunities taking a back seat. Canon 1DX 16-35mm lens, 1/125th sec @ f6.3 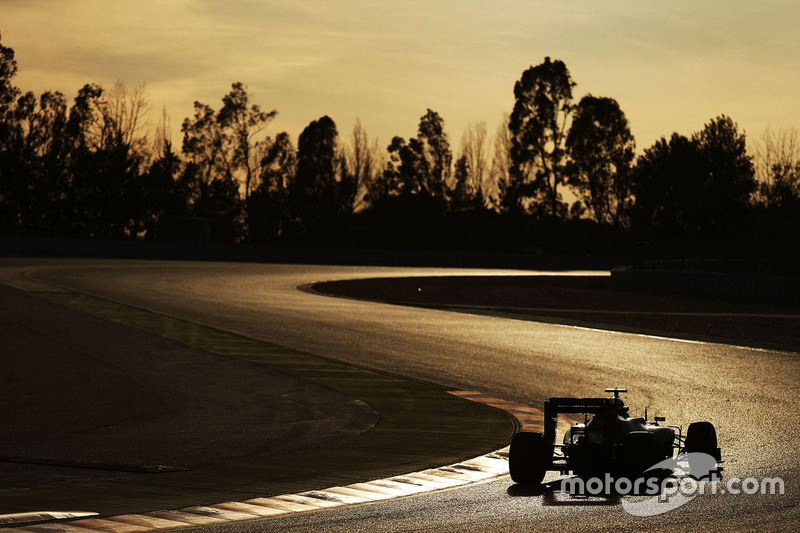 Thousands of laps later, and much has been learnt, but still nobody really knows who is fast and who is not. The sun has set on another year of winter testing... Canon 1DX, 70-200mm lens, 1/8000th sec @ f4 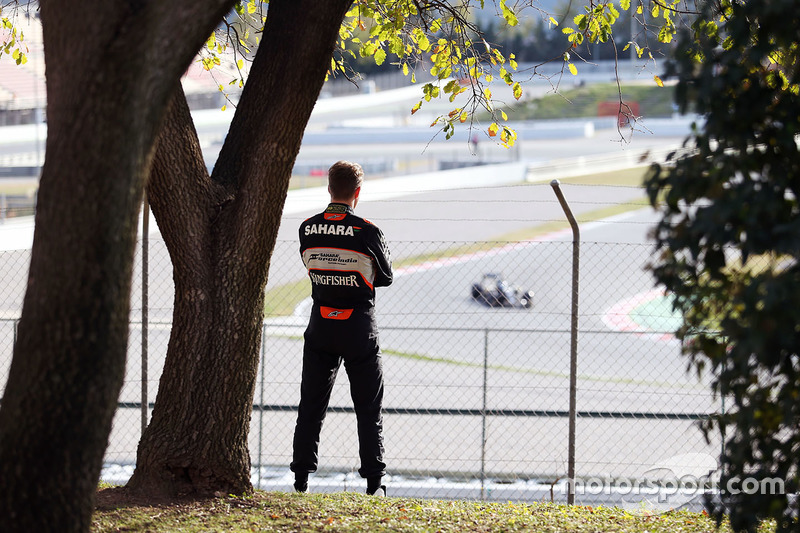 I was conducting a photoshoot in a studio with Nico Hulkenberg during a day off in his schedule, when Nico decided he wanted to see how his competitors were looking from trackside. As he watched, I photographed him. A nice moment as Nico looks on. Canon 1DX, 1/500th sec @ f4

Lewis Hamilton, Mercedes AMG F1 on a hoverboard in the paddock with his dogs Roscoe and Coco 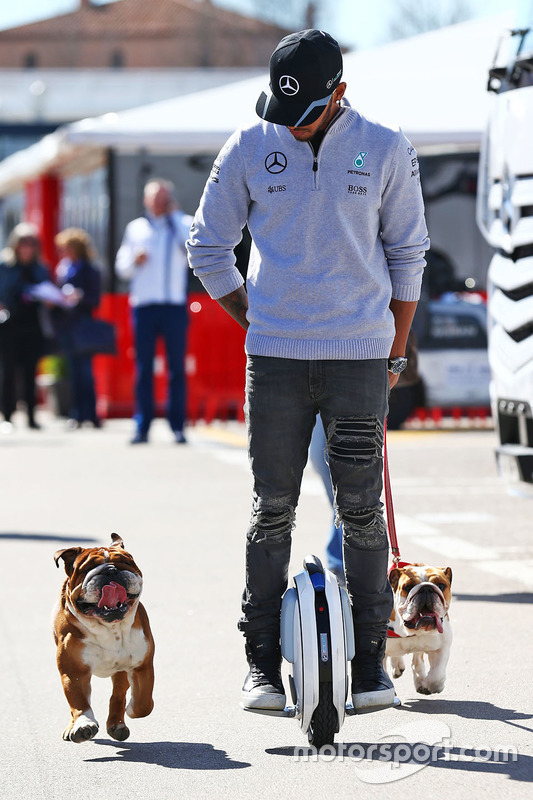 How does a triple World Champion arrive into the paddock? On a unicycle, of course, with his dogs in tow. Testing photography is not all about low light and racing cars. There is a desire from news outlets for this type of image too. Canon 1DX, 1/1000th sec @f5.6 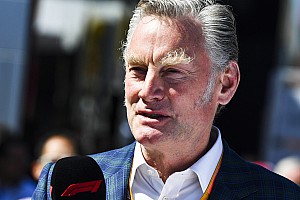 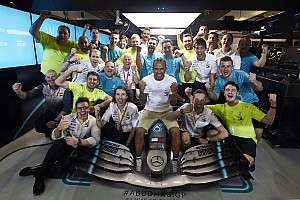 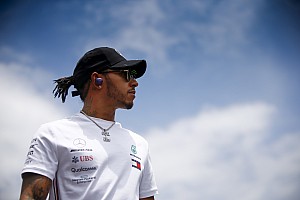 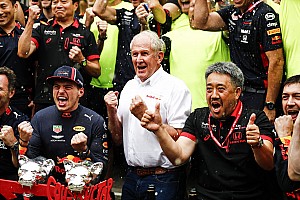